The Psychology of High-Quality Membrane Switches and Touch Screens 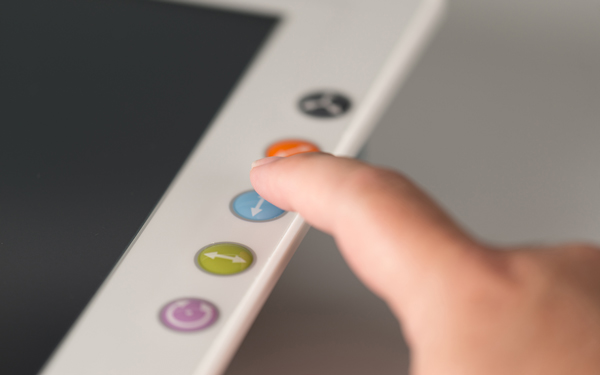 Input devices are about more than just functional effectiveness: they also impact user experience. They determine how pleasing users find equipment and devices, and how likely they are to value the equipment.

Consider, for example, the Aesthetic-Usability Effect, originally studied by researchers Masaaki Kurosu and Kaori Kashimura from the Hitachi Design Center in 1995. This effect means that “people perceive more-aesthetic designs as easier to use than less-aesthetic designs“, whether they’re actually easier to use or not.

In other words, machines with aesthetically pleasing designs are more likely to be used and better rated

And it’s not just about looks. Every aspect of the user’s interaction with the machine has a psychological dimension to it. That includes visual, auditory (acoustics), and tactile (haptics) interactions.

Here’s a practical example: think of counter top coffee machine. The user inputs instructions through some form of input device, like a membrane switch, built into its base. When the input device is inexpertly designed and constructed, even if it’s functionally effective, it will deliver a sub par experience that might lead the user to use that coffeemaker less and opt out of buying another one down the road.

By contrast, a well-designed input device makes operation simple and engages the user on visual, tactile, and perhaps even auditory levels. For example, the membrane switch might incorporate attractive and eye-catching illuminated keys that makes it easy to find the right buttons to push; those buttons might even change color upon being pressed. They might also generate some noise, anything from a soft click to an electronic tone. These forms of feedback facilitate correct use of the device and inform the user that their instructions have been successfully received.

The keys themselves might even be aesthetically pleasing to touch. For example, raised keys designed with something like Hoffmann + Krippner’s GT technology provides a satisfying amount of tactile feedback and keeps the keys clean and functional for the full life of the equipment. It just feels good to the finger. In fact, with the right design and construction, the keys might be so appealing, the user wants to push that button. (We once had a visitor ask to take a sample membrane switch home for his kid just because the lighted, tactile buttons were so fun to play with).

Manufacturers of consumer devices like Apple, of course, know these principles well and use them to create a “neurological hook” for the consumer, as described by Robin Lewis and Michael Dart, authors of The New Rules of Retail: Competing in the World’s Toughest Marketplace. They write:

“As various research studies in the field of neuroscience have found, when people encounter an elevated experience, their brains release many chemicals. One in particular that has attracted a lot of attention is dopamine, which leads to feelings of euphoria, self-satisfaction and well-being.”

They argue that when people use devices and equipment that can create that elevated experience, they experience a dopamine-fueled emotional response that they may not even consciously recognize, whose net effect is to “hook” them as customers.

Or, as Amy Bucher, a psychologist and Associate Director of Behavioral Science for Wellness & Prevention, Inc., a Johnson & Johnson Company, puts it, “Sleek technology and elegant functionality increase product appeal. But to really hook users with your product, help fulfill their psychological needs.”

If you’d like to learn more about the craftsmanship and design required for truly exceptional input devices, contact us with questions or for more information.